The script calls for two actors to play all parts.  (Alternatively, four actors could be cast.) 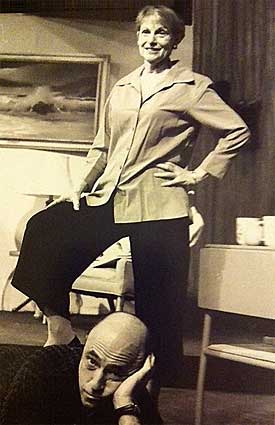 Psychologists Kate and Ben greet the audience and start their tale—how a married professional couple set out to co-write a popular book on personality traits, based on the Myers-Briggs Type Indicator® assesment.  Full of enthusiasm, Kate and Ben move to a writers’ retreat: WE’RE GONNA DO IT WITH A BOOK! In a deadline frenzy, they pick four couples from their own practices to show how the pairs of personality types affect one’s life and loves, calling the book TYPE TALKING.

Facing writer’s block, they role-play each couple, starting with soap opera actress Alana, an extrovert (E), and screenwriter George, an introvert (I). Their match feels like DESTINY. For the second pair of traits, Kate recalls Earl, a sensing type (S), who sees life concretely as a CARPENTER MAN.  His wife, waitress Wilma Dean, the intuitive type (N),views life through rose-colored glasses–proud to be a VIRGINIA GIRL. Each thinks “I can change him/her after we get married.”

For the third pair, Ben suggests lawyer Pamela, the thinking type (T). She laments to her psychologist, the failure of yet another relationship, due to her headstrong need to win: SCRABBLE FOR ONE. Smitten with pediatrician Jason, an open-hearted feeling type (F), she vows to change in SCRABBLE FOR TWO. For the fourth pair, Kate and Ben choose a New York couple. Arlene, the fastidious judging type (J), kvetches about Sheldon, the impulsive perceiving type (P), as they bicker about a trip to San Francisco in DELI-LEMMA. Having introduced the four couples, Ben and Kate sing smugly of their own perfect relationship in ISN’T IT GREAT?

Next, they tackle conflicts arising from mismatched pairs. Extrovert Alana’s babbling grates on introvert George whose anger erupts in OPPOSITES ATTRACT. They separate. Sheldon tries to seduce Arlene, only to find that sex is not on her schedule. 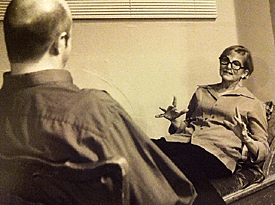 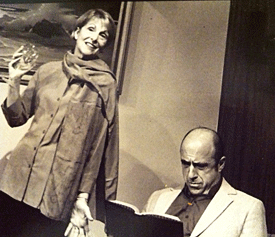 As Act II opens, Ben bemoans their SO-CALLED LOVE and Kate wonders WHAT NOW? Barely civil, they turn to the book’s last section–resolution. Pamela and Jason, now in couples’ therapy, pledge to KEEP YOUR HEART OPEN. Alana tries to reconcile with George, but feeling it’s futile, he must WALK AWAY. Earl bets Wilma Dean can’t survive without him. In WAY MORE WOMAN, she flaunts her independence and lures Earl back into her arms.  From a pew at their son’s wedding, Arlene warbles her WEDDING WOES, while Sheldon romanticizes their own wedding, urging her to repeat their vows.

Through portraying how the four couples did or didn’t resolve their problems, Kate and Ben come to understand their own, and marvel at their new-found closeness in WHO WOULD HAVE THOUGHT? With the smashing success of their book, Kate and Ben, along with the four couples, take their bows, reveling in having found THE TYPE FOR ME.